12:28 PM – Passed by Dwight, Illinois. Just saw a northbound Amtrak train heading to Chicago. Feels very like in my childhood memory of travel between Rockford and Monmouth, Illinois. The family used to travel US 34. We used to see many trains along that route. (Sorry, no picture, as I am in traffic.)

Traffic has slowed to a crawl. Seems there is some roadwork or a police action of a head up ahead.
“Work zone speed limit 55 mph.” (Actual speed 24, but it has been 10 mph for the last 10 minutes. Do the math!)  And there they are: those people who see the merge signs for the last 2 miles and wait to the last minute to join traffic because they think that the rest of us are stupid and will let them in. And it only takes one generous person to make them right. Now four lanes have become two lanes, one northbound one southbound. The southbound lanes of I-55 or being revealed re-built. (76.3 miles into the trip) 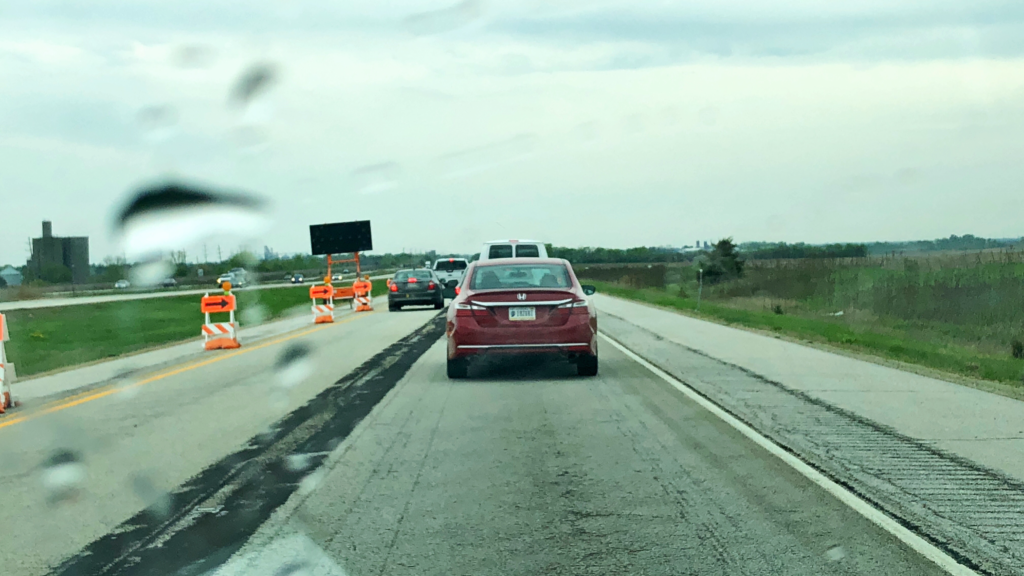 12:49 PM – Left the construction zone at exit 201, Continuing south on I 55. Detour signs indicating the delay was about 13 minutes with results. That feels about right. (Around Pontiac, Illinois)

1:03 PM – South of Pontiac, Illinois. It is wonderfully flat and open near here. This is prime central Illinois chase country. You can see all the way to the Verizon in almost every direction. And the landscape is almost completely free of distractions, except for the occasional microwave, cellular, or radio tower. There are power lines in the distance. A few scattered trees, I’m really not much here. Basically a blank canvas on which to paint a memory. (Tried to take a picture here, it was cut in half the long horizontal. What’s up with that?)  I have moved far enough south that I have left the 60°F weather in Chicago and I’m surrounded by 80°F temperatures.

1:36PM – stopped at rest area south of Bloomington-Normal, to stretch my legs, visit the restroom, and grab a light snack. Leving the Illinois pollination exhibit behind, By-bye busy little bee! 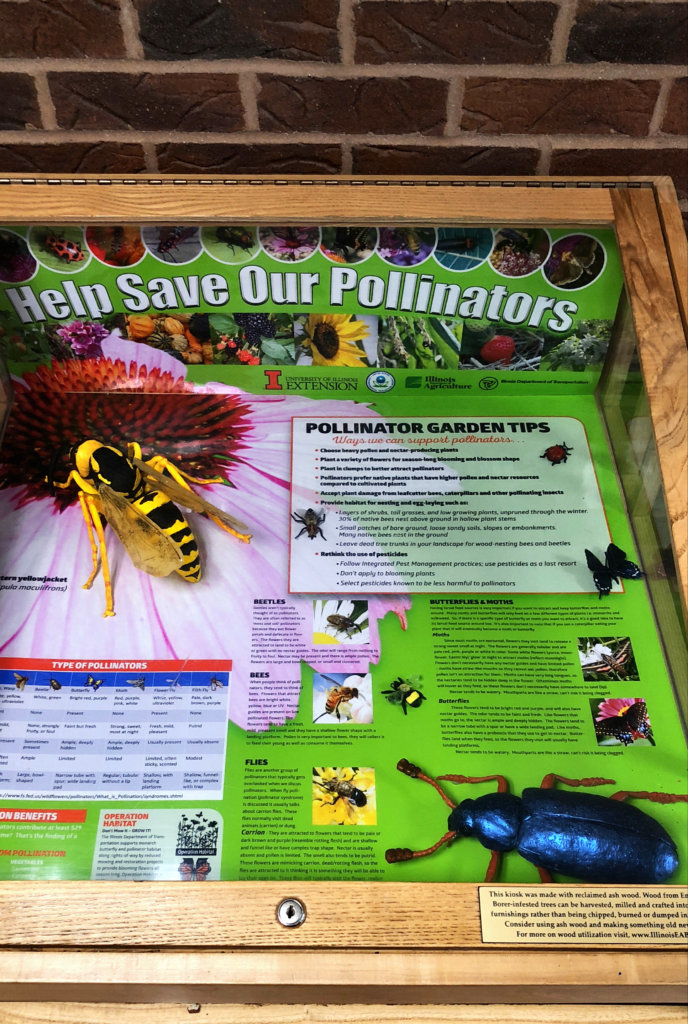 2:02 PM – Passing the NWS weather radar at Lincoln Illinois (KILX).  It is approximately the midpoint between Chicago and St. Louis along interstate 55.

2:24 PM – travel note: 555 mile post 104 is the location of a rest area on the southbound traffic. This is a little closer to the midpoint of the Chicago St. Louis leg of the journey.

3:24 PM – Just outside St. Louis. Traffic has crawled to a near halt due to construction. We are
grinding along and about 20 miles an hour. Looks like the right lane is closed ahead. We are just south of Worden.

3:37 PM – Exited the construction zone. Very lucky to only have two delays in Illinois. On certain past trips I had 50 miles of construction; this time wasn’t so bad.

4:10 PM – Welcome to Missouri. Took I-255 across to I_44 and beyond. Definitely better than going downtown during rush hour. Temperature here is 91°F. It is like summer! I am loving every minute of it.

8:08 PM – Arrived at Motel 6 North, Springfield, Missouri. Feeling tired but very happy. So THIS is what vacation feels like, I had almost forgotten! Unpacked the van then went to sleep (gently). Zzzzzzz. 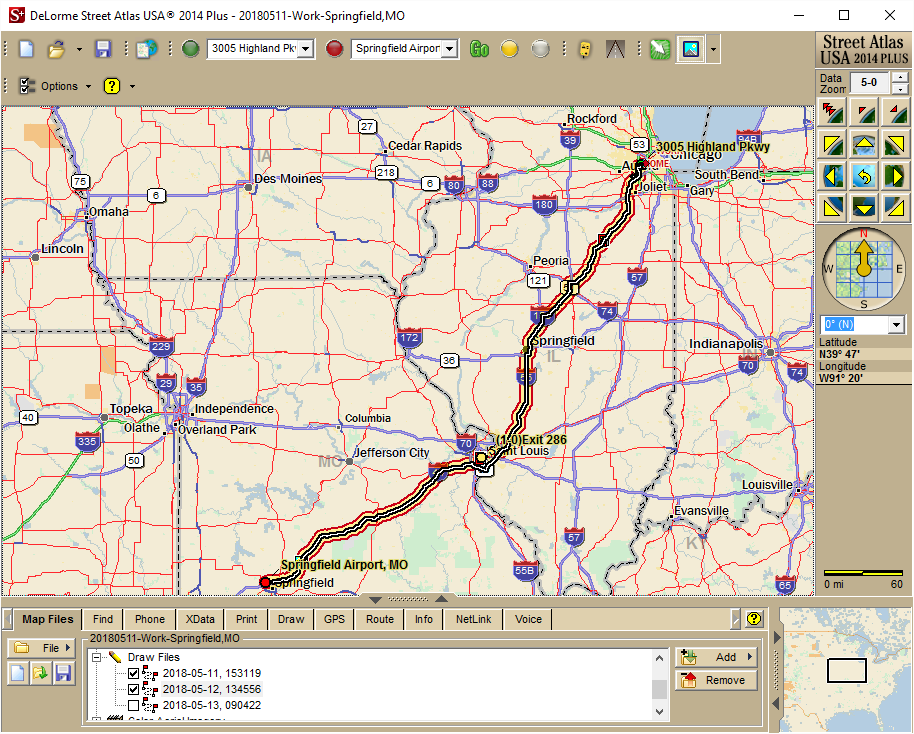 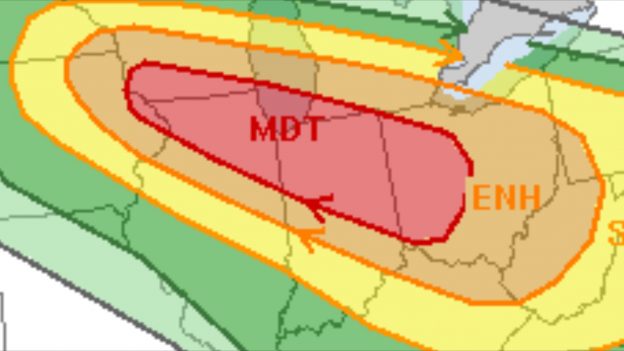 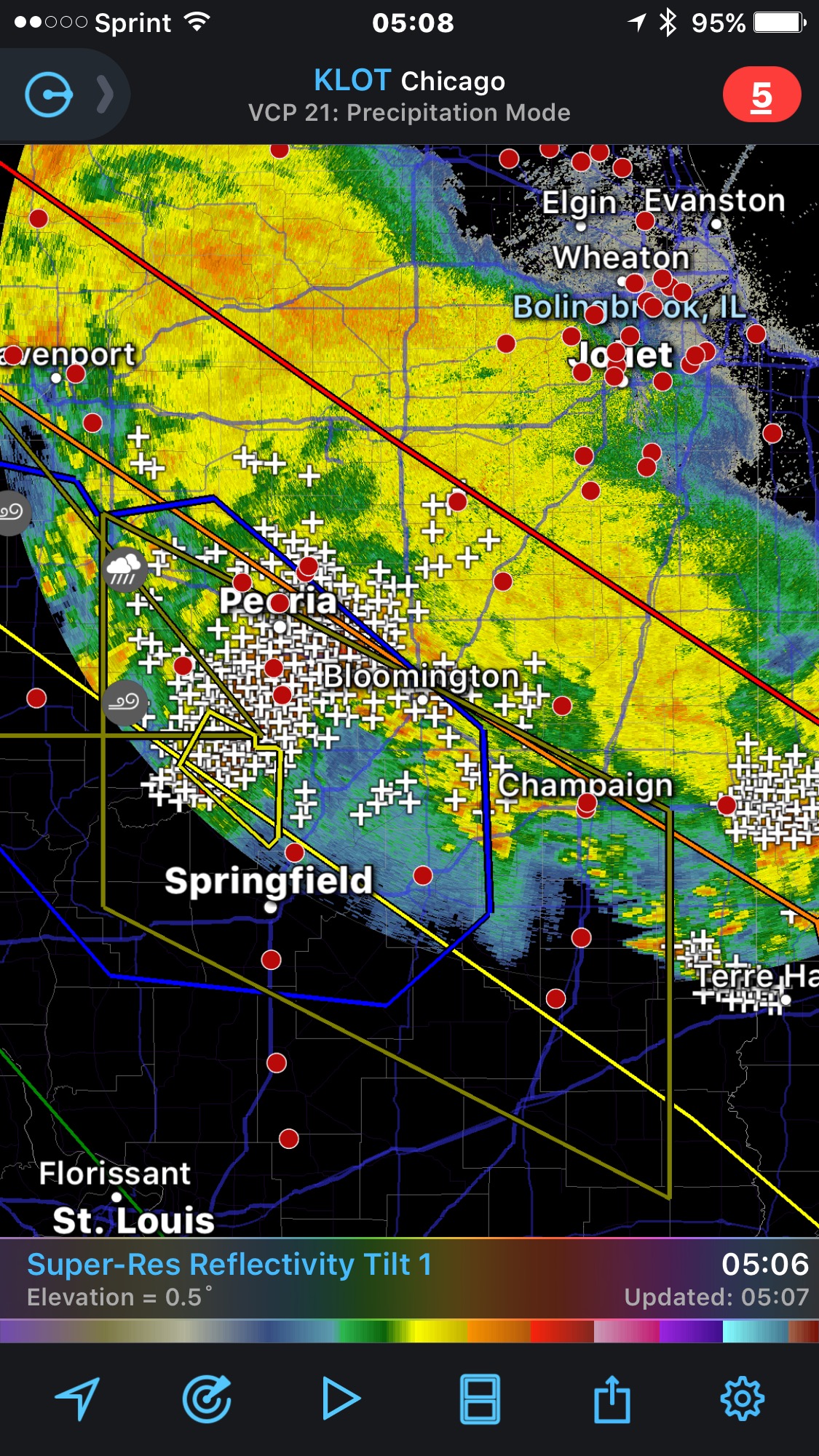 The NAM and GFS models are still calling for a big event today: 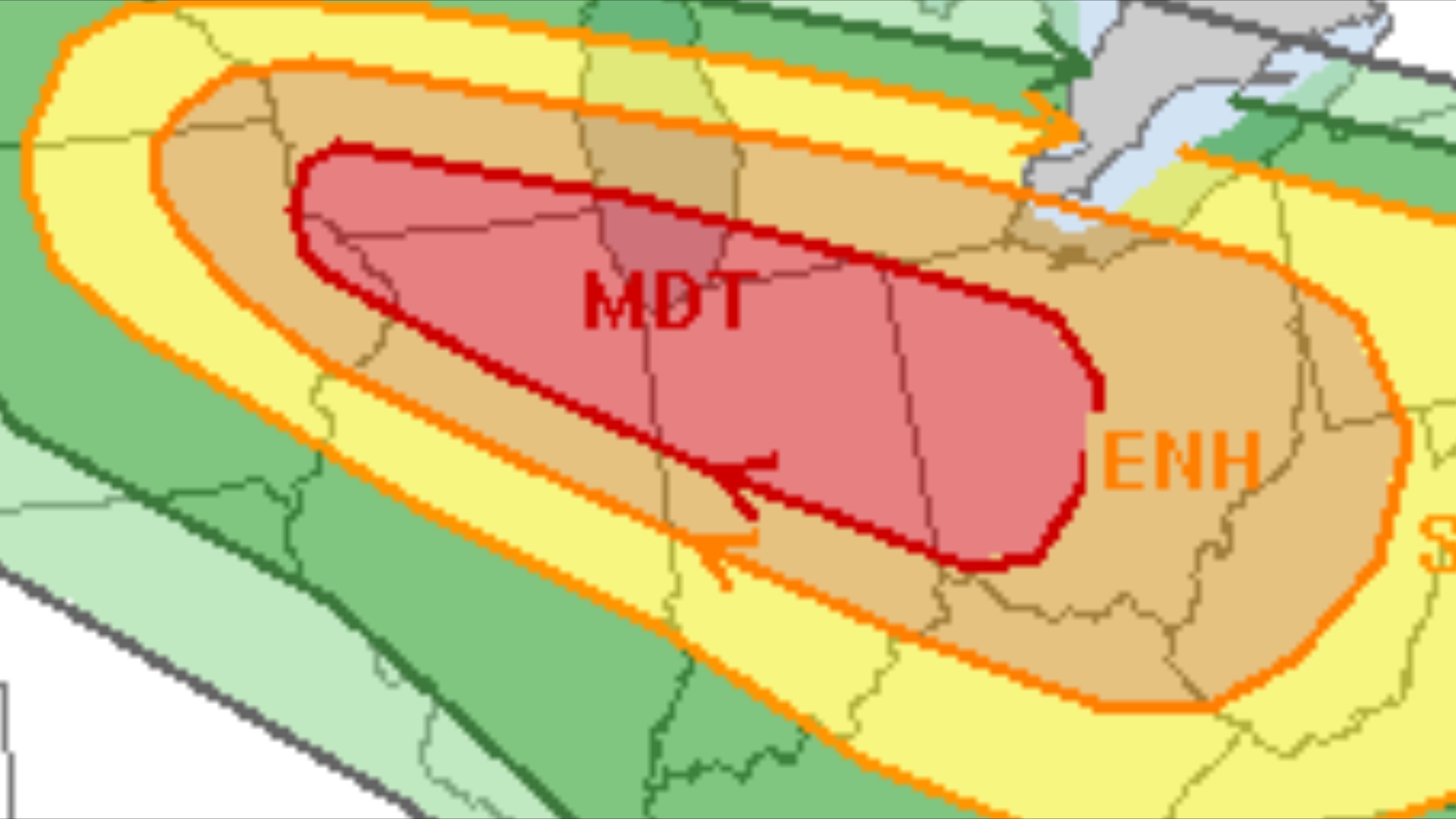 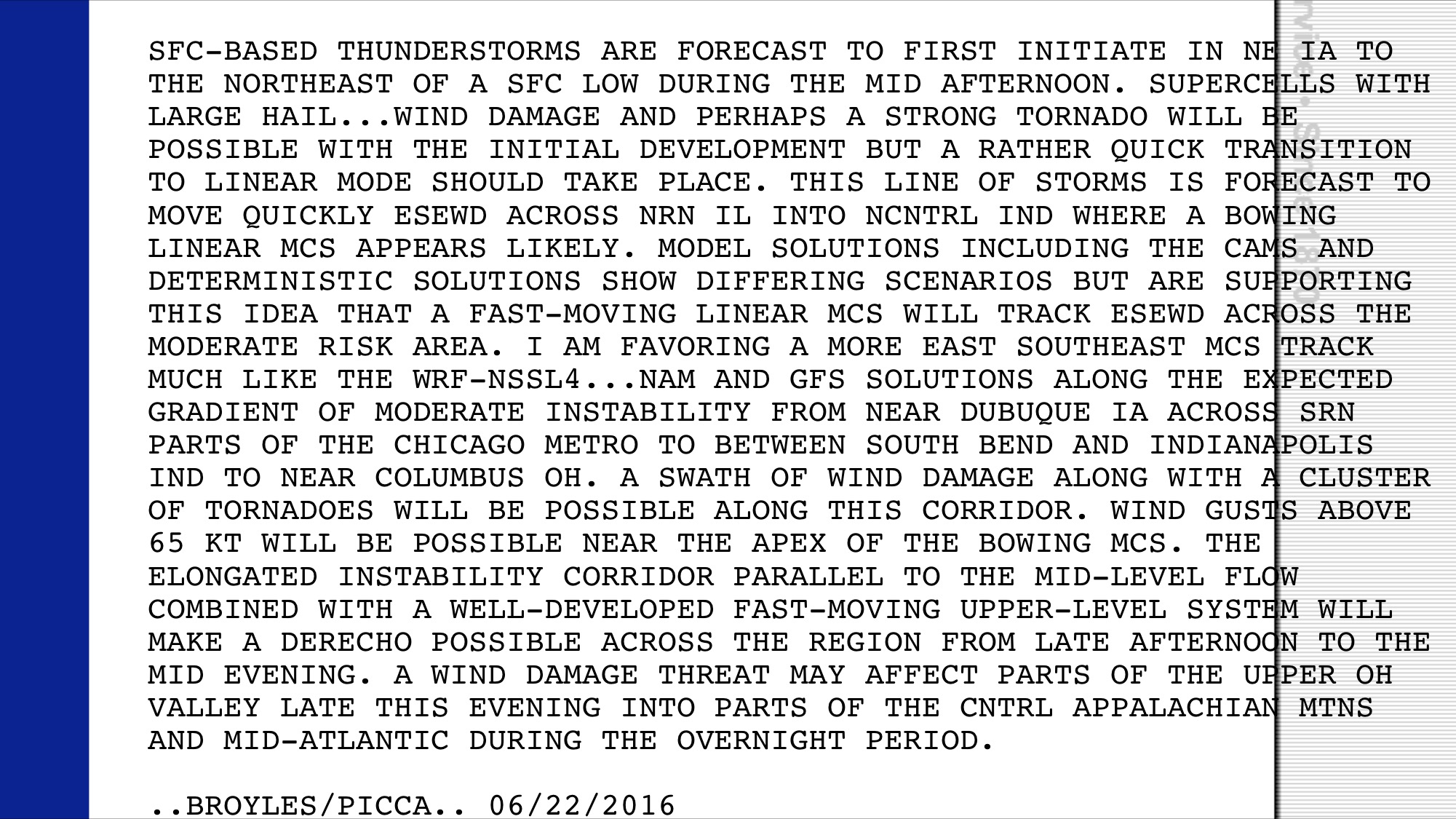 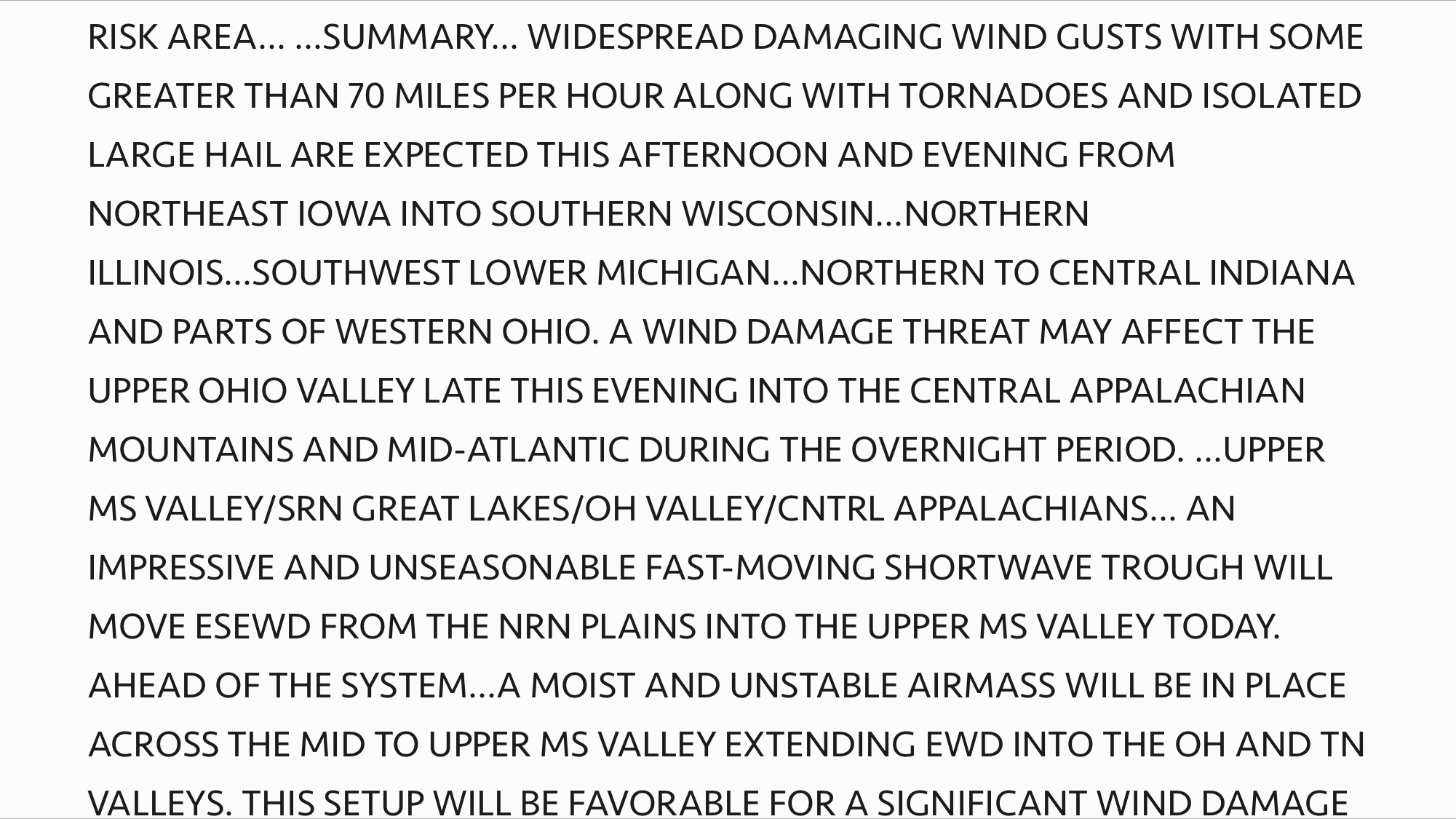 The current tornado probability [for the day as a whole] looks like this: 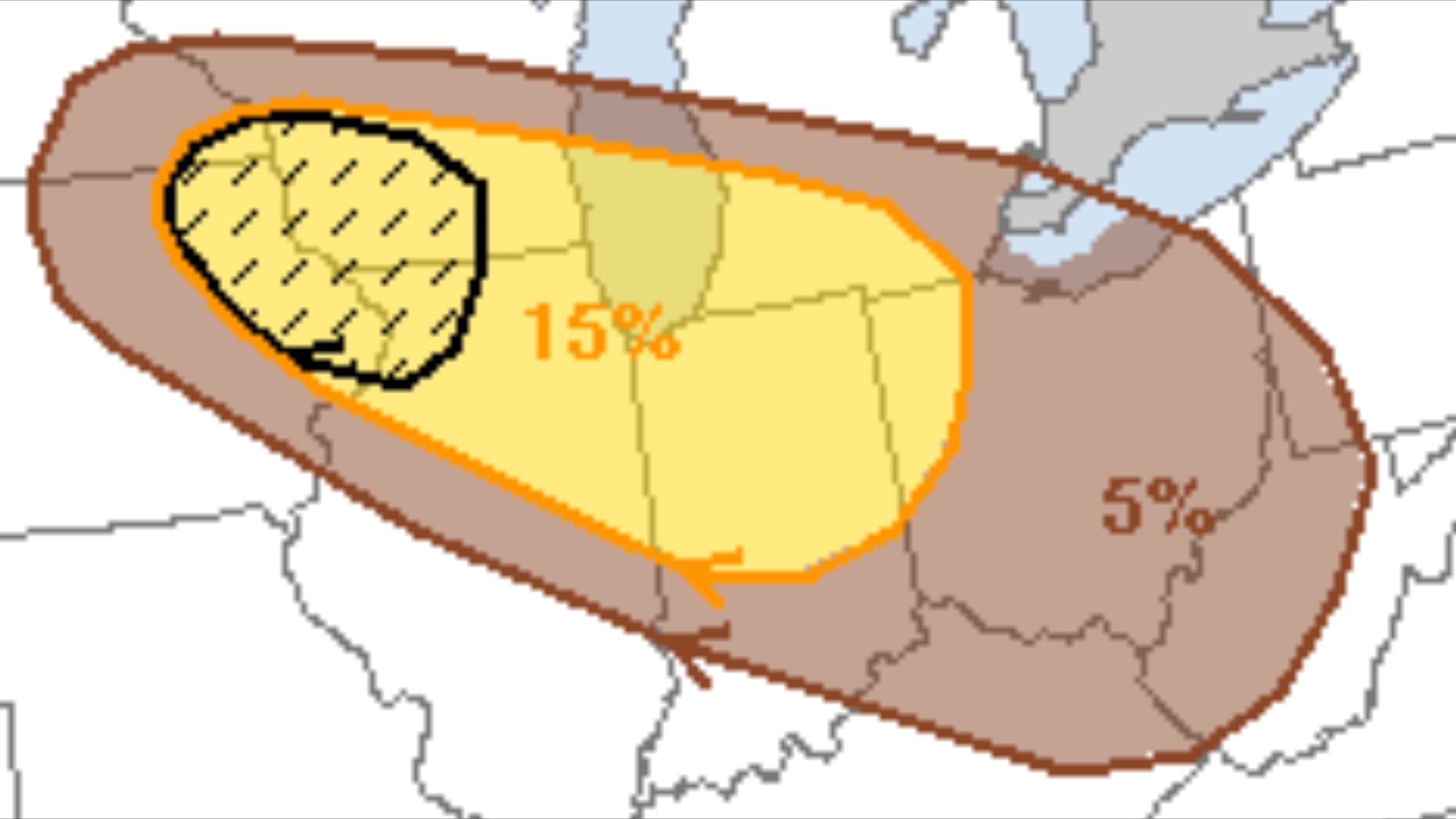 Severe wind probabilities for the day are as follows (per the 4 AM models): 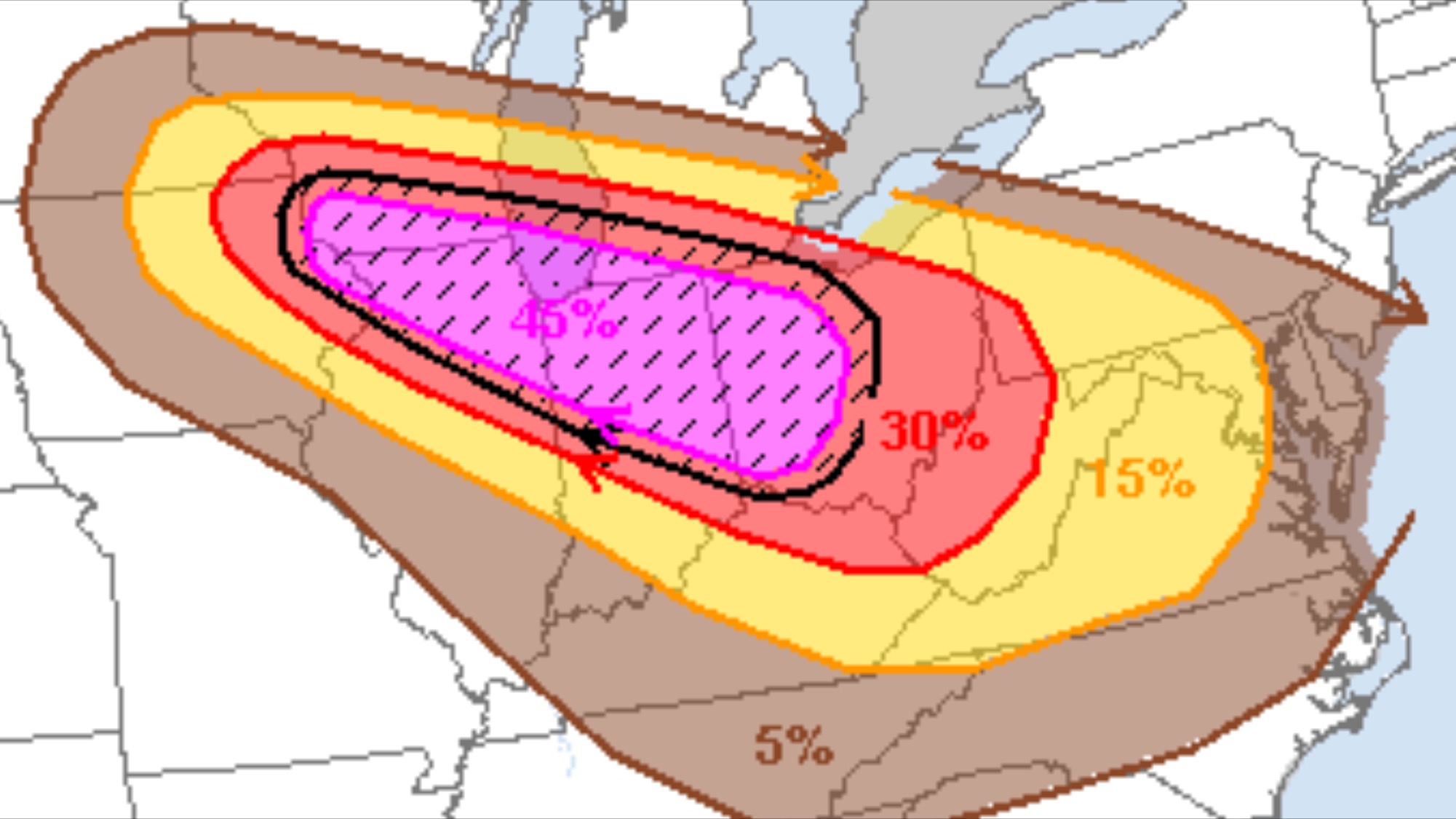 And severe hail looks like this, per the same forecast for the day: 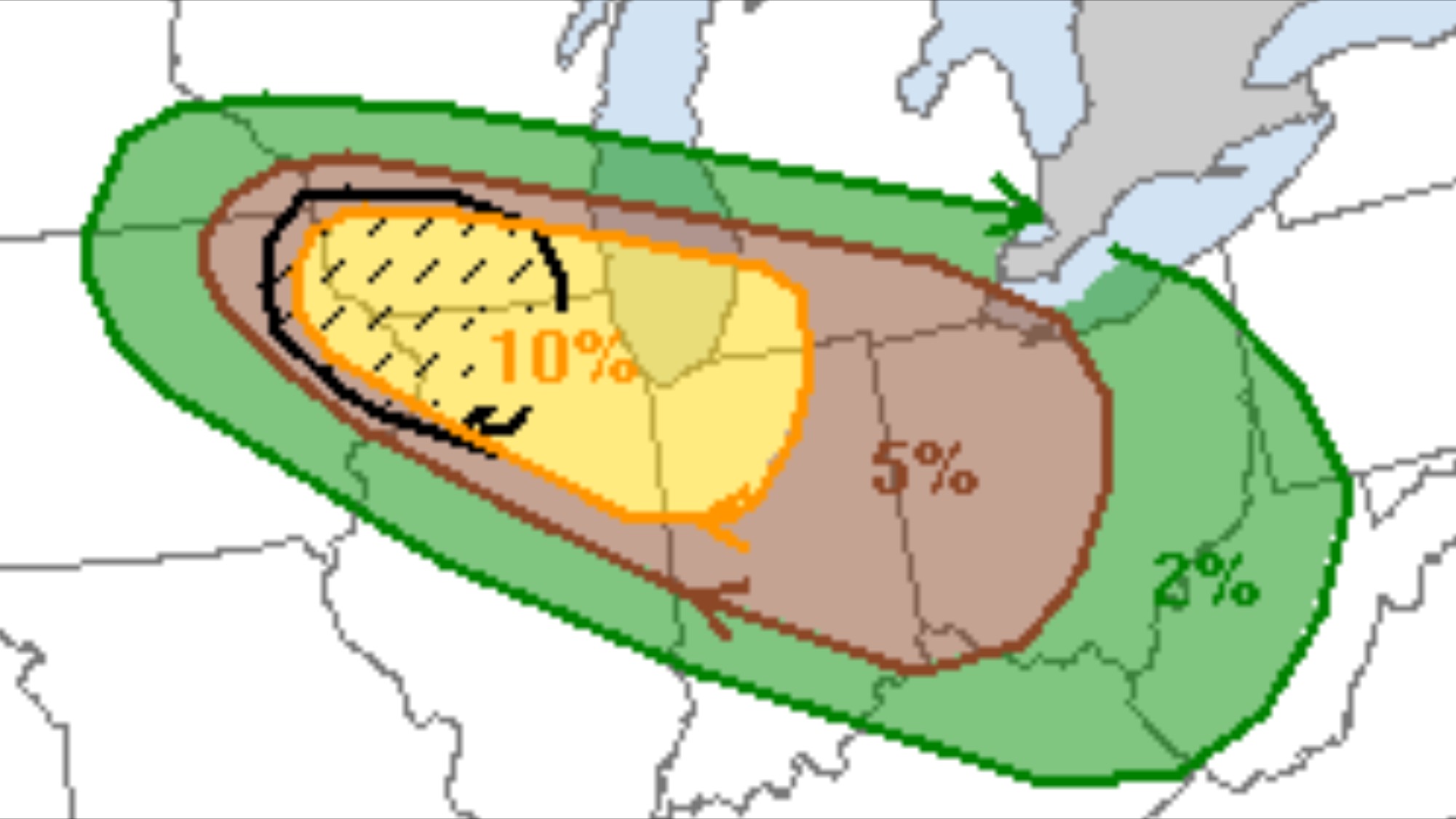 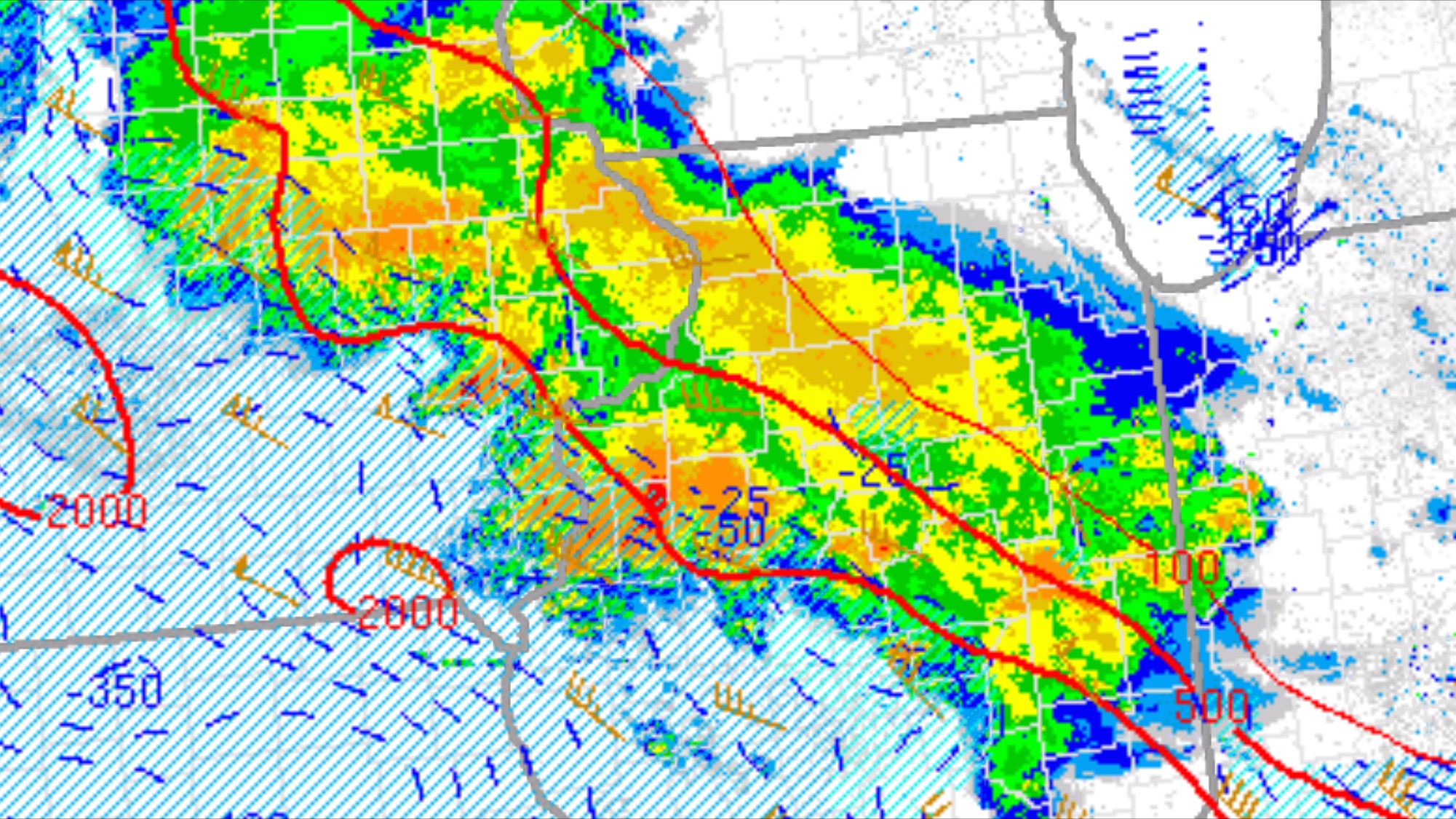 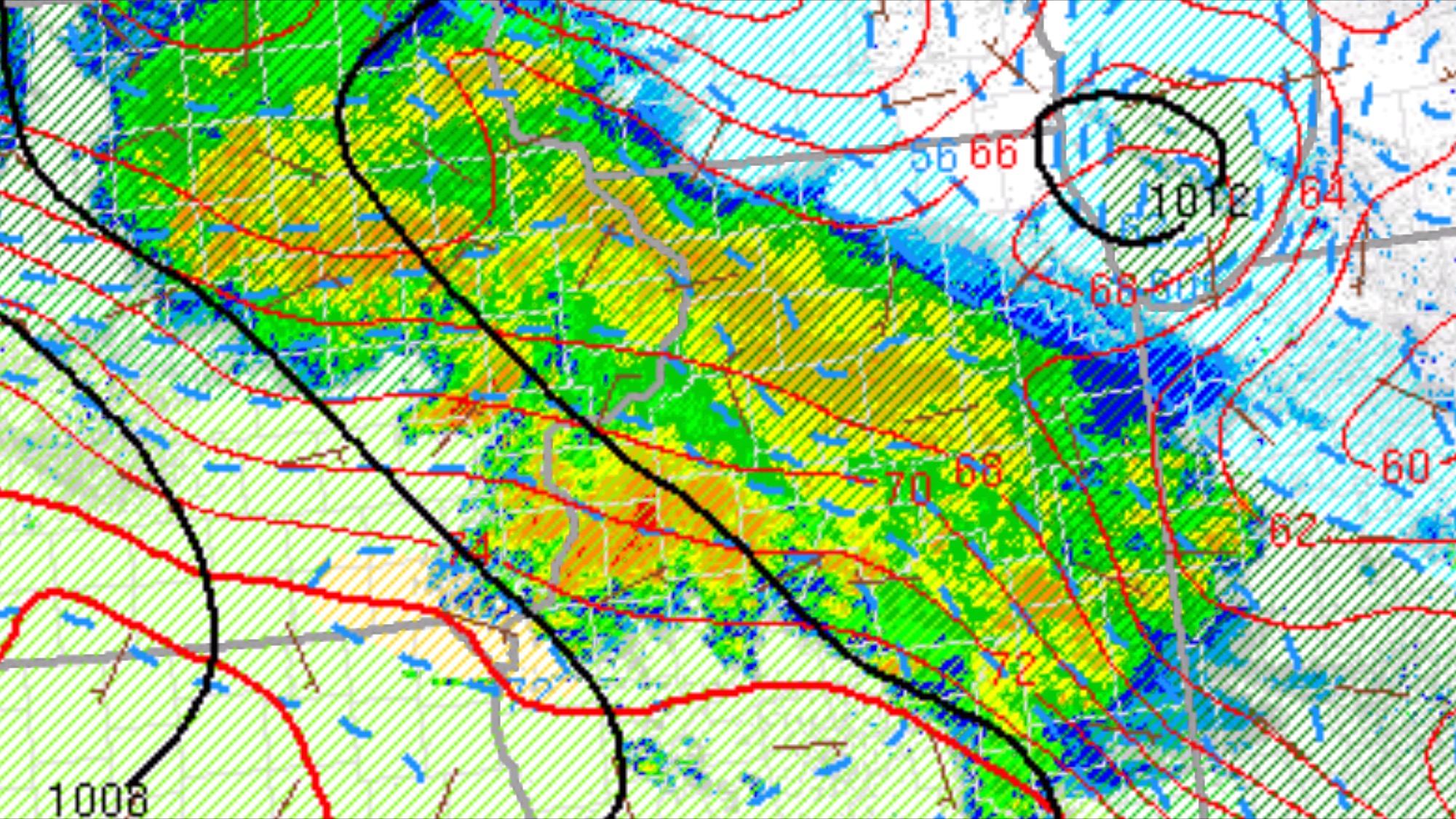 And the tornado parameters at the moment are well below any kind of threat threshold: 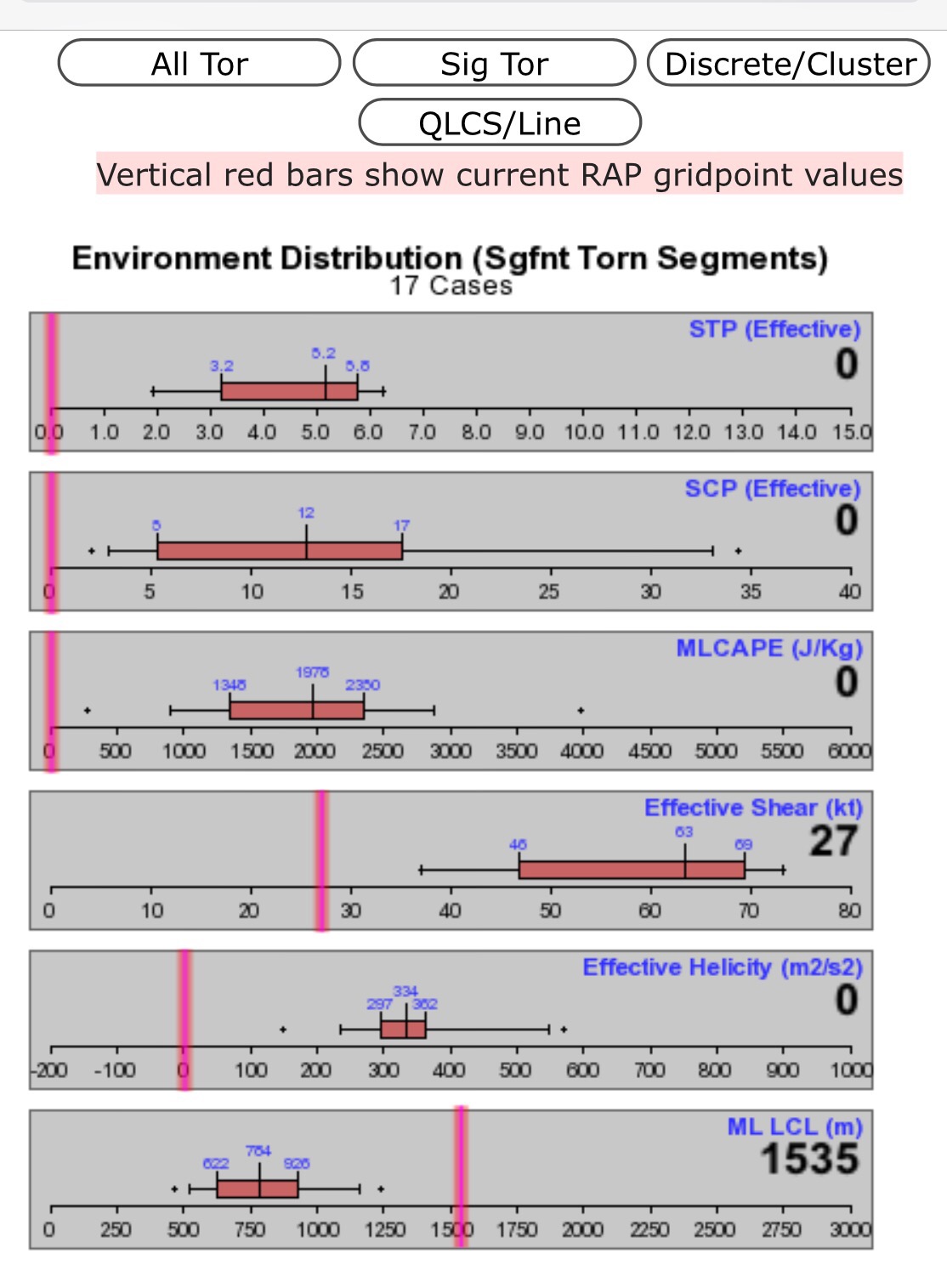 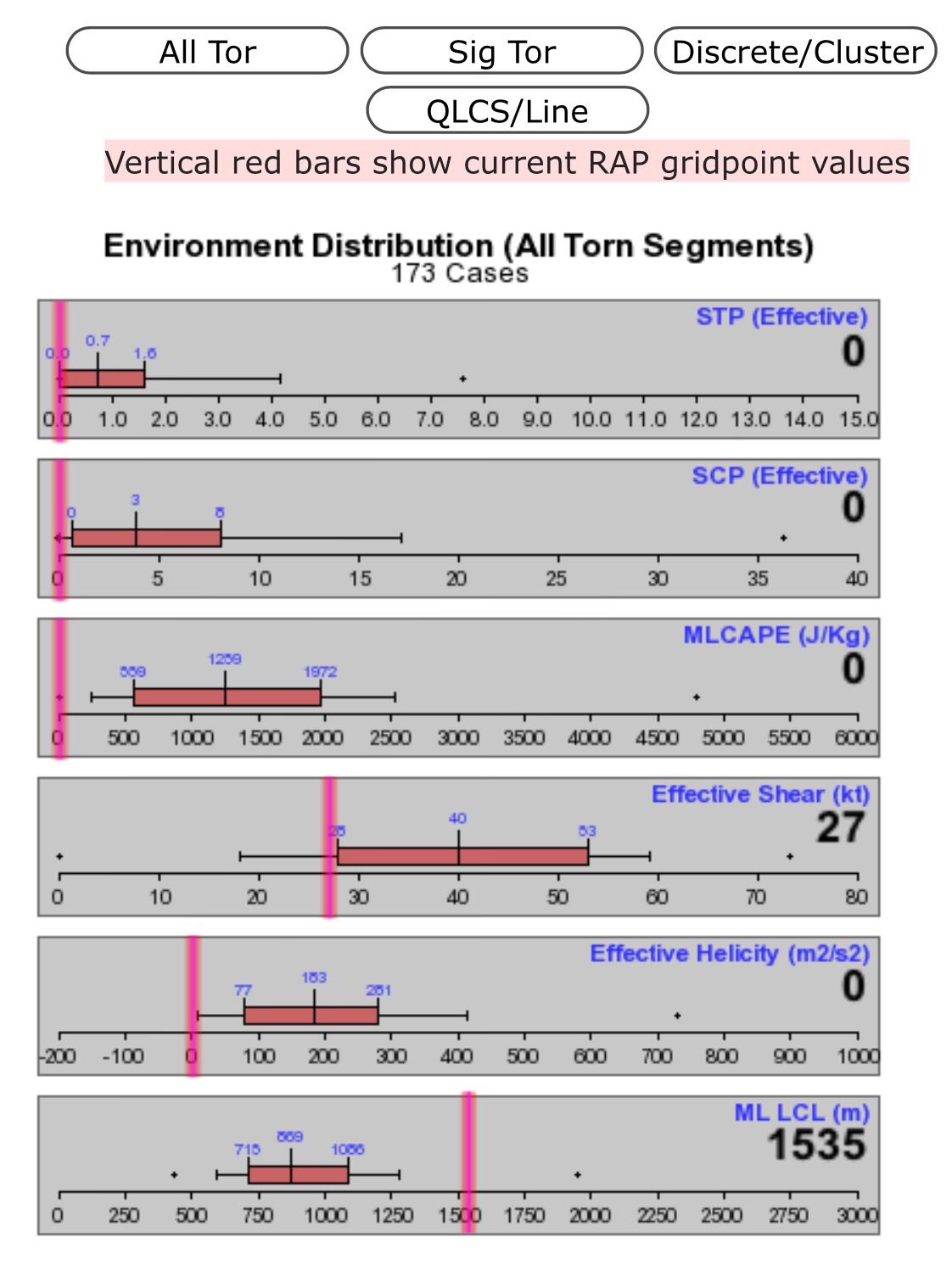 I will be watching these carefully as the day unfolds.

The sky was intensely red a moment before I took this picture, but it recalls the old expression “red in the morning, sailors take warning.” 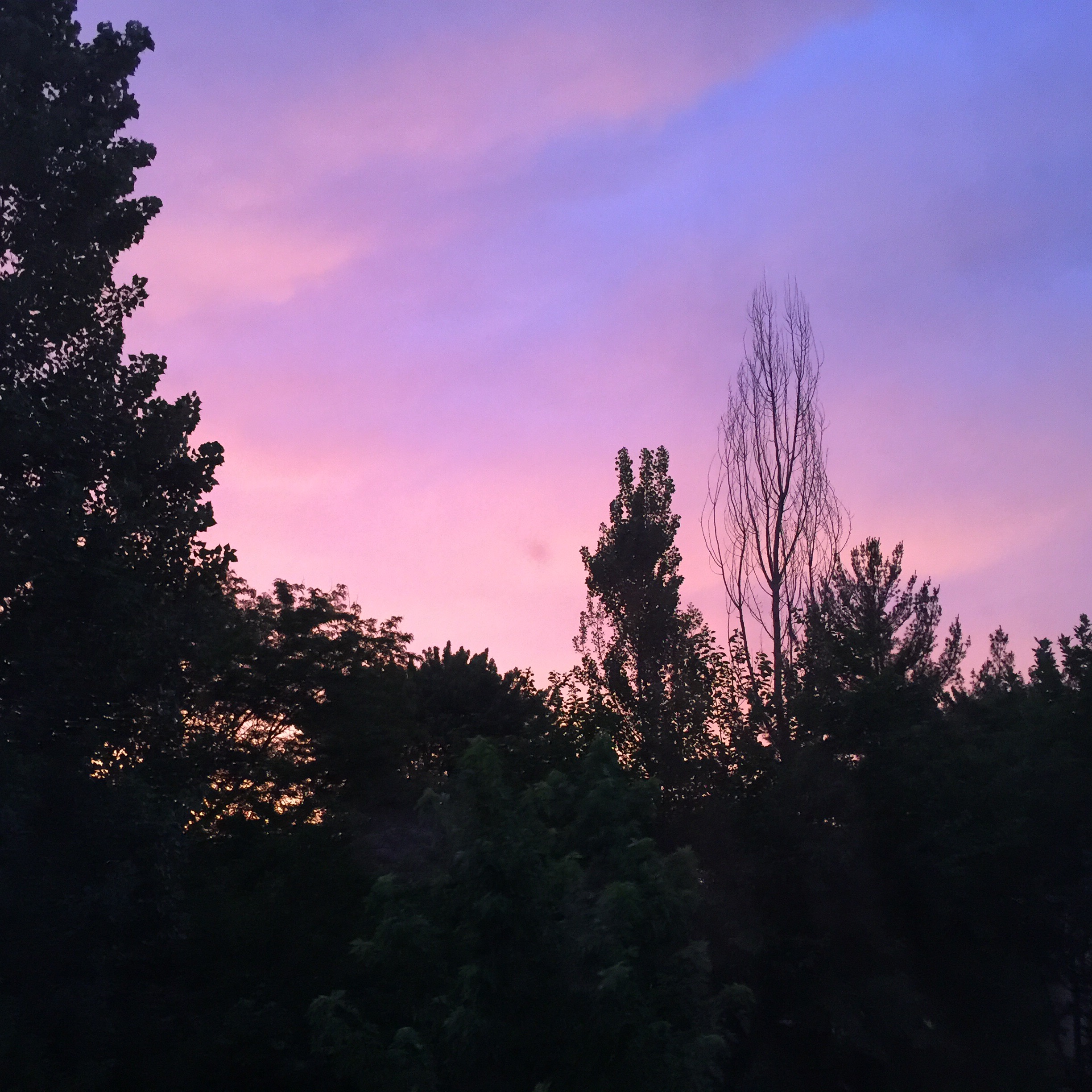 8am – updates to the maps above show little change: 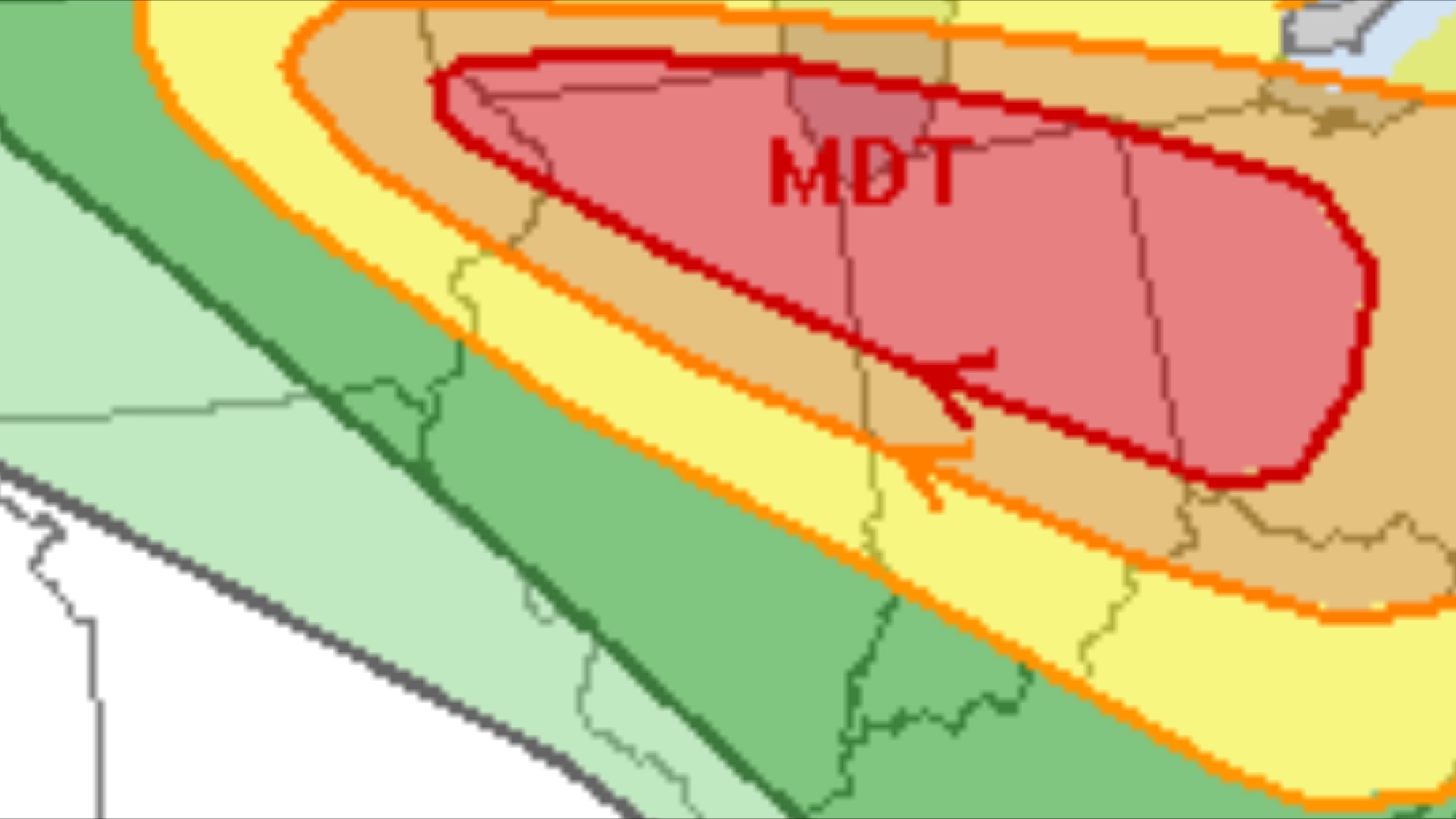 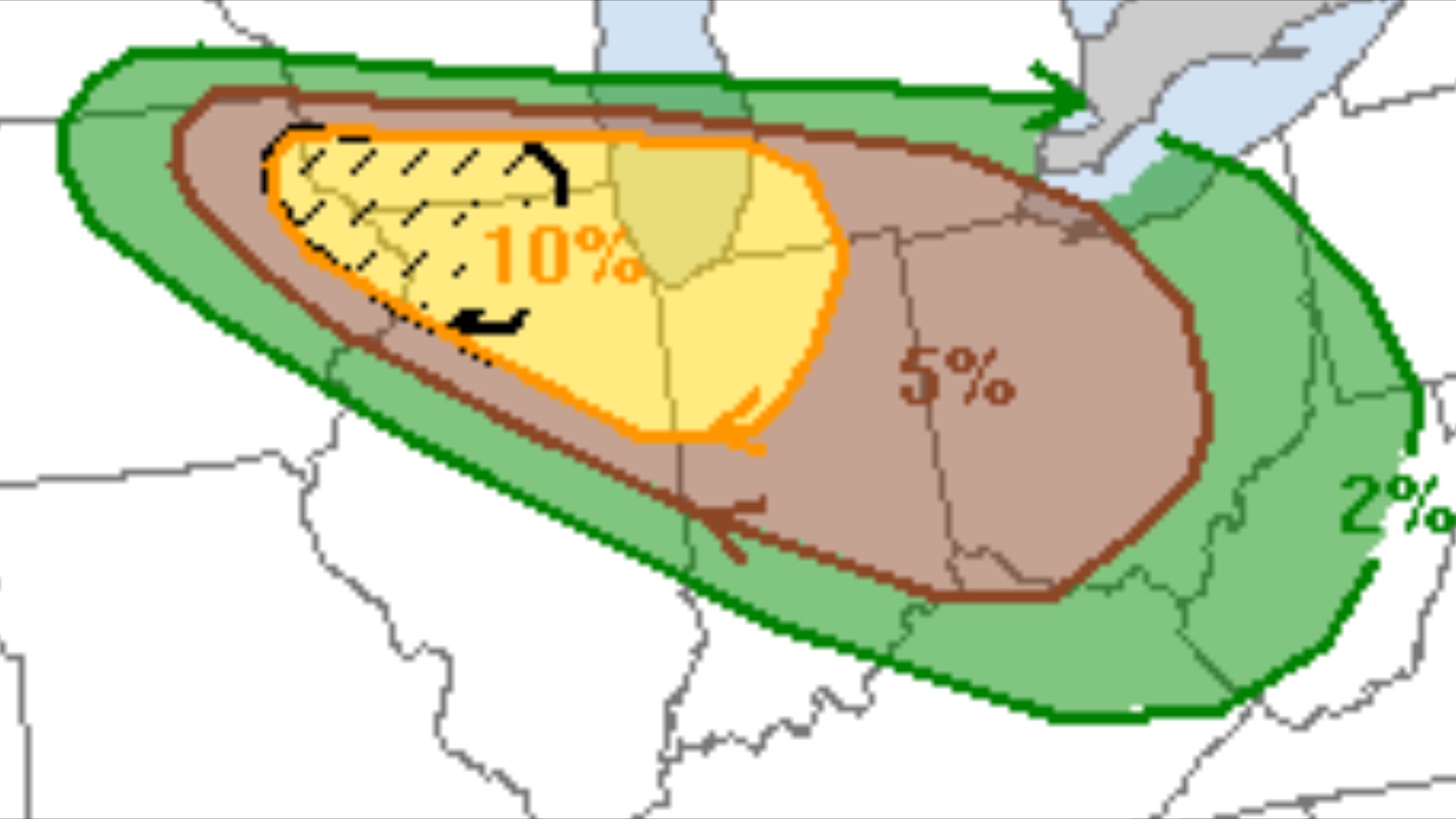 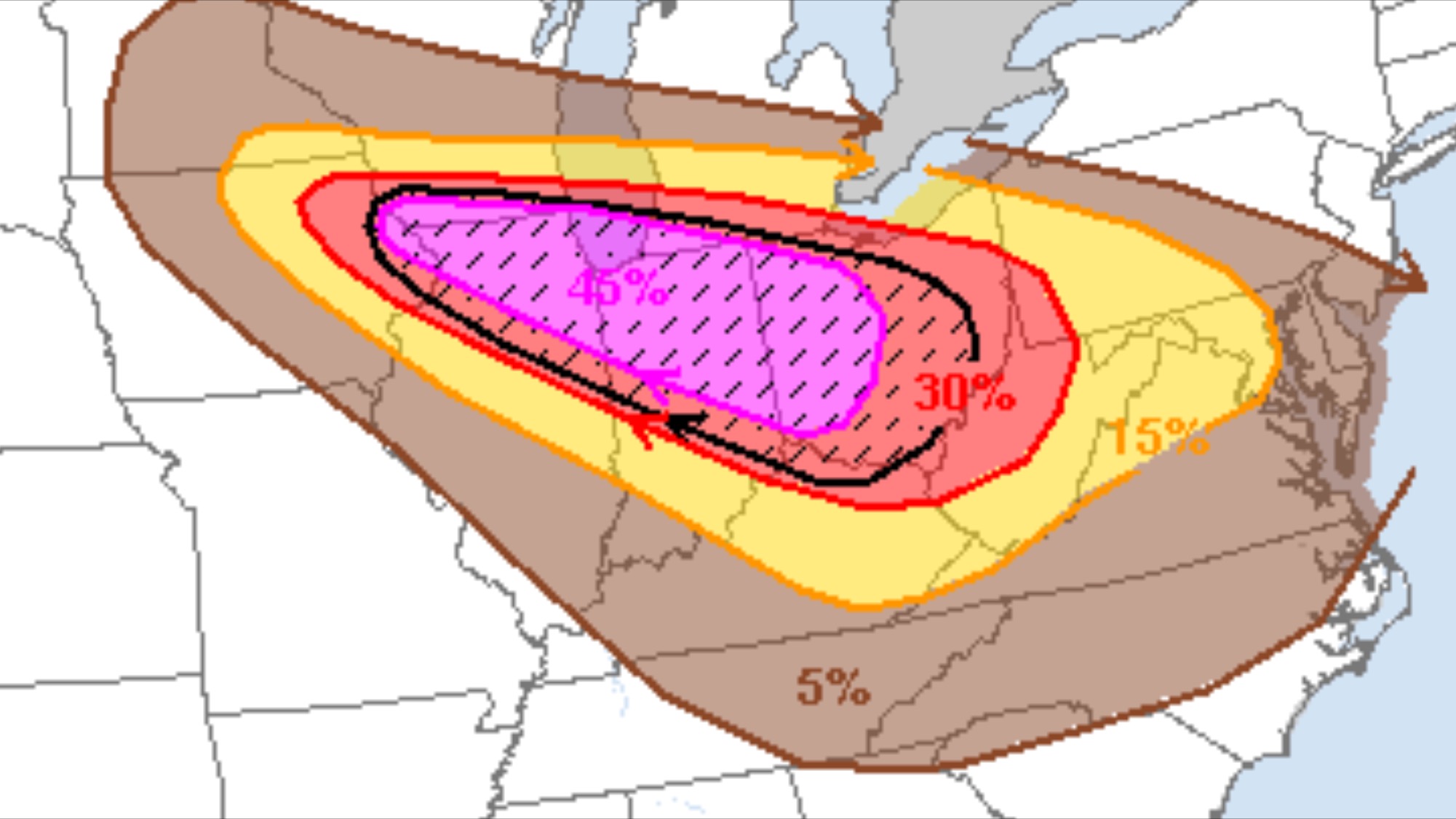 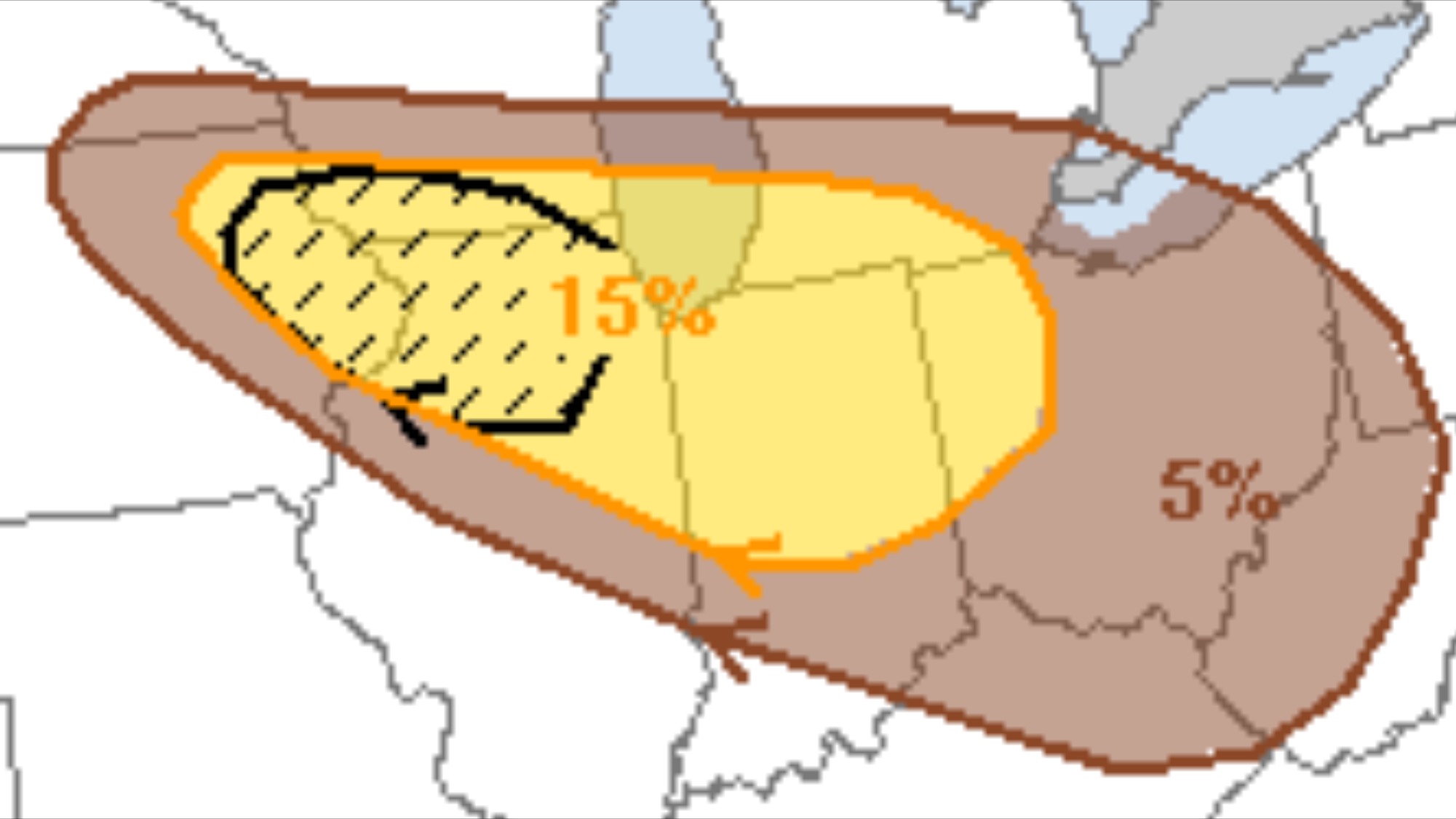 Up to this point, nothings severe reported: 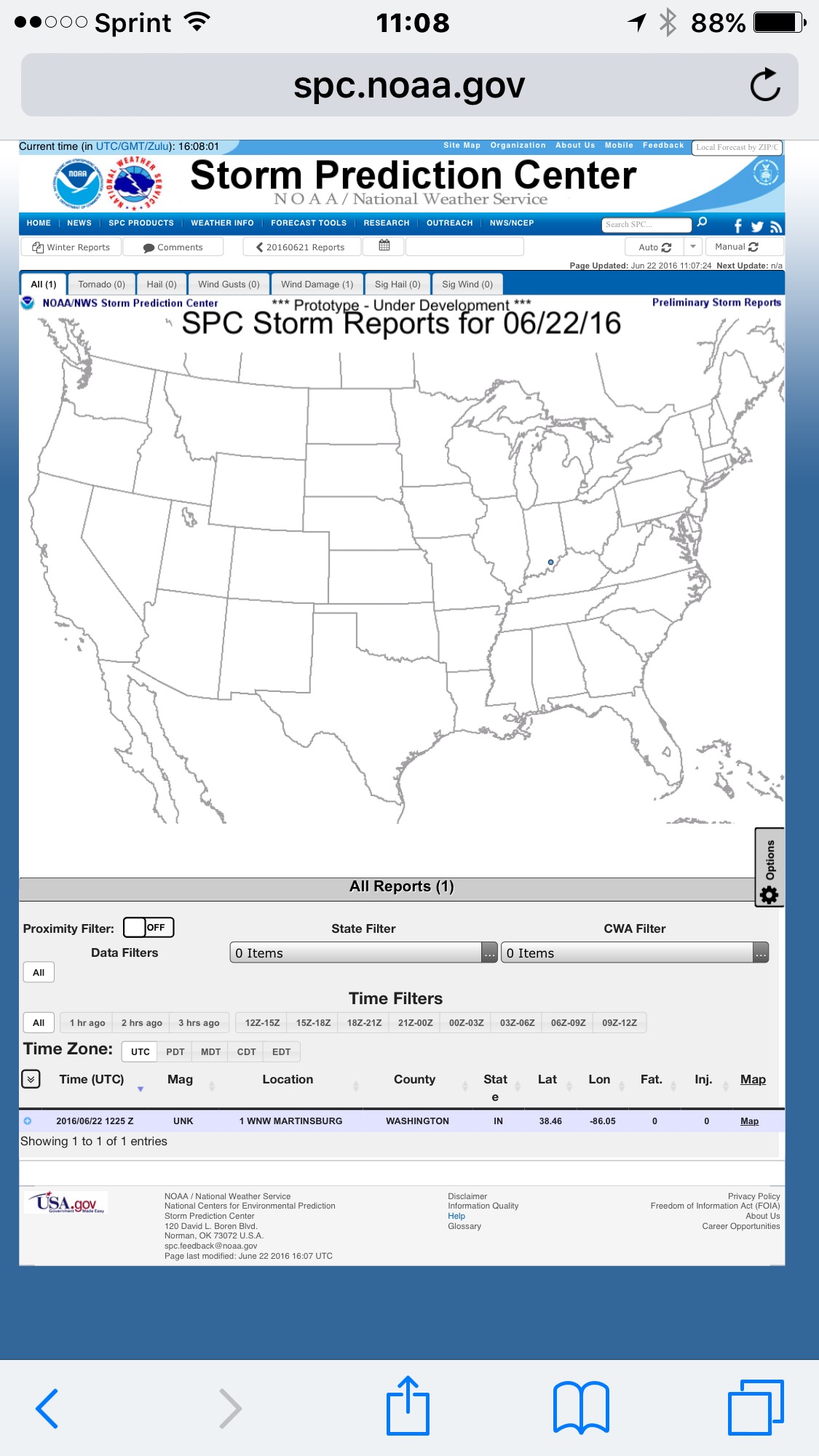 15:10 – Arrived at the Naperville emergency operation center (DOC). Started up the weather computers and radios, in preparation for arrivals about their staff later in the afternoon. Traded in my XL size polo shirt for a new uniform shirt in a medium. (Doing a happy dance on the inside!)

15:35CDT – An axis of steep lapse rates is oozing east from Iowa. 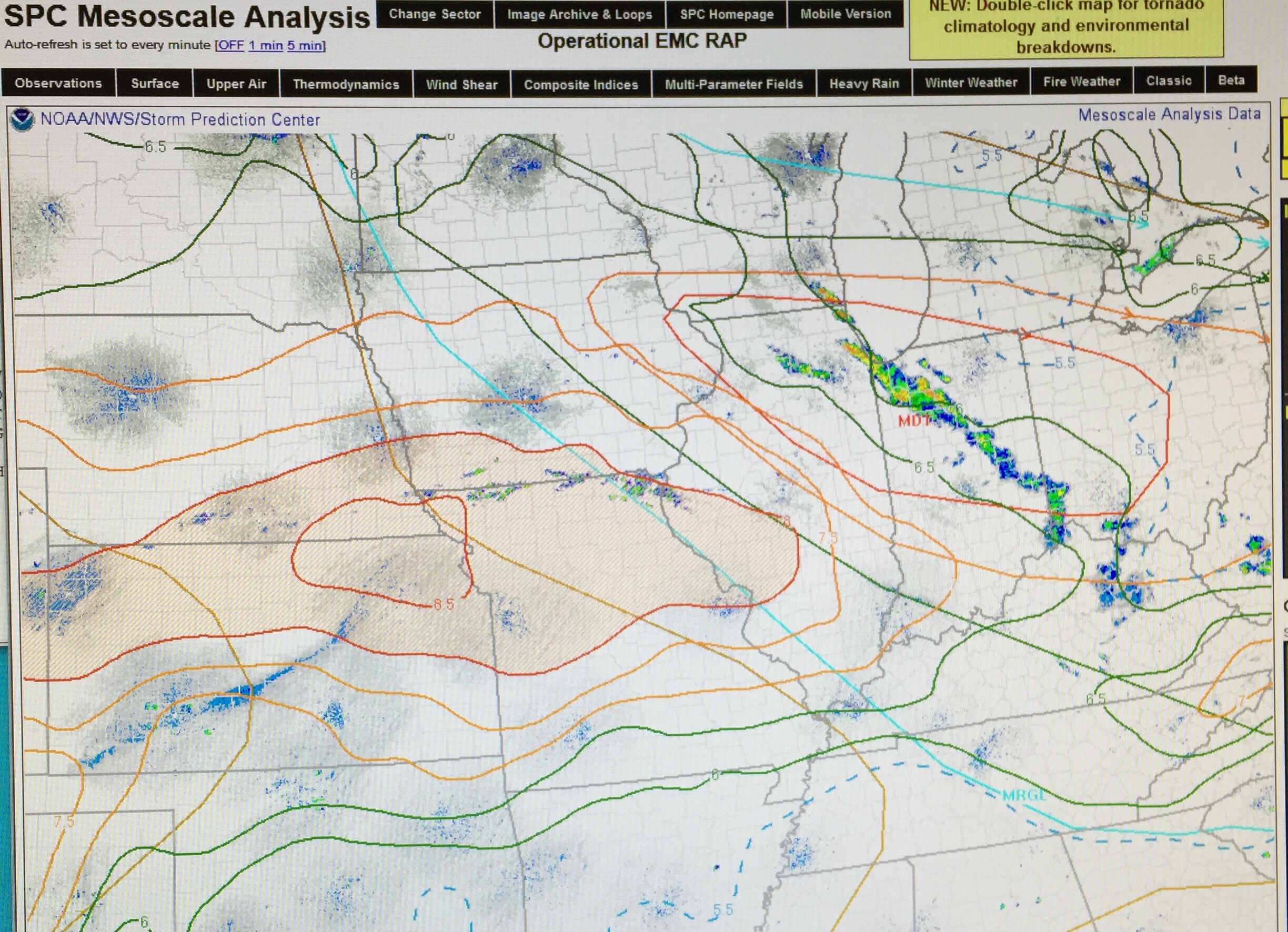 1730 CDT – Looks like a tornado watch is imminent, per mesoscale discussion MD1020. 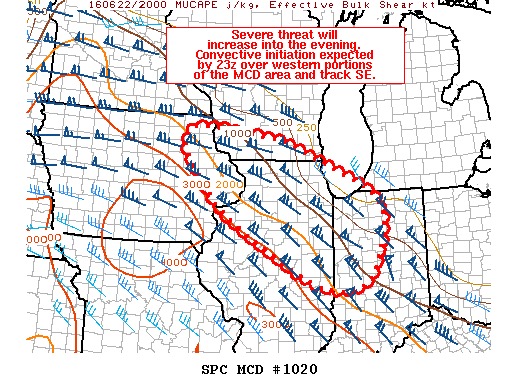 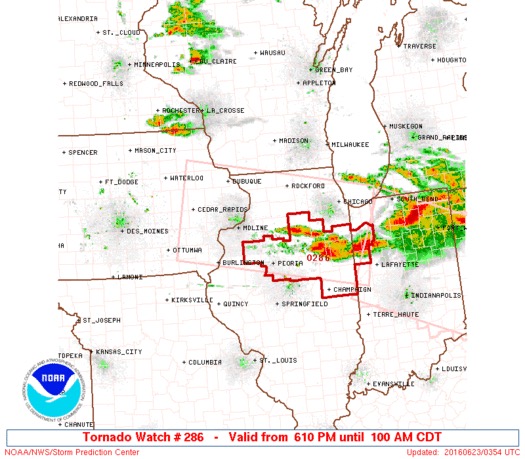 While the situation could change from the forecast above, I heave a sigh of relief that the primary area of a risk is to the south of the Chicago metro area. Had this been forecast to occur 25 miles further north, the situation could have been very dangerous for the western suburbsand Chicago proper. Once again, we dodge the bullet, it seems.

1834 CDT – A severe thunderstorm warning goes up near Amboy, Illinois. Even at this point, Al Fisher and I spot a strong couple of forming on the base philosophy velocity plot.”Why aren’t they issuing a tornado warning on this,” we ask one another. 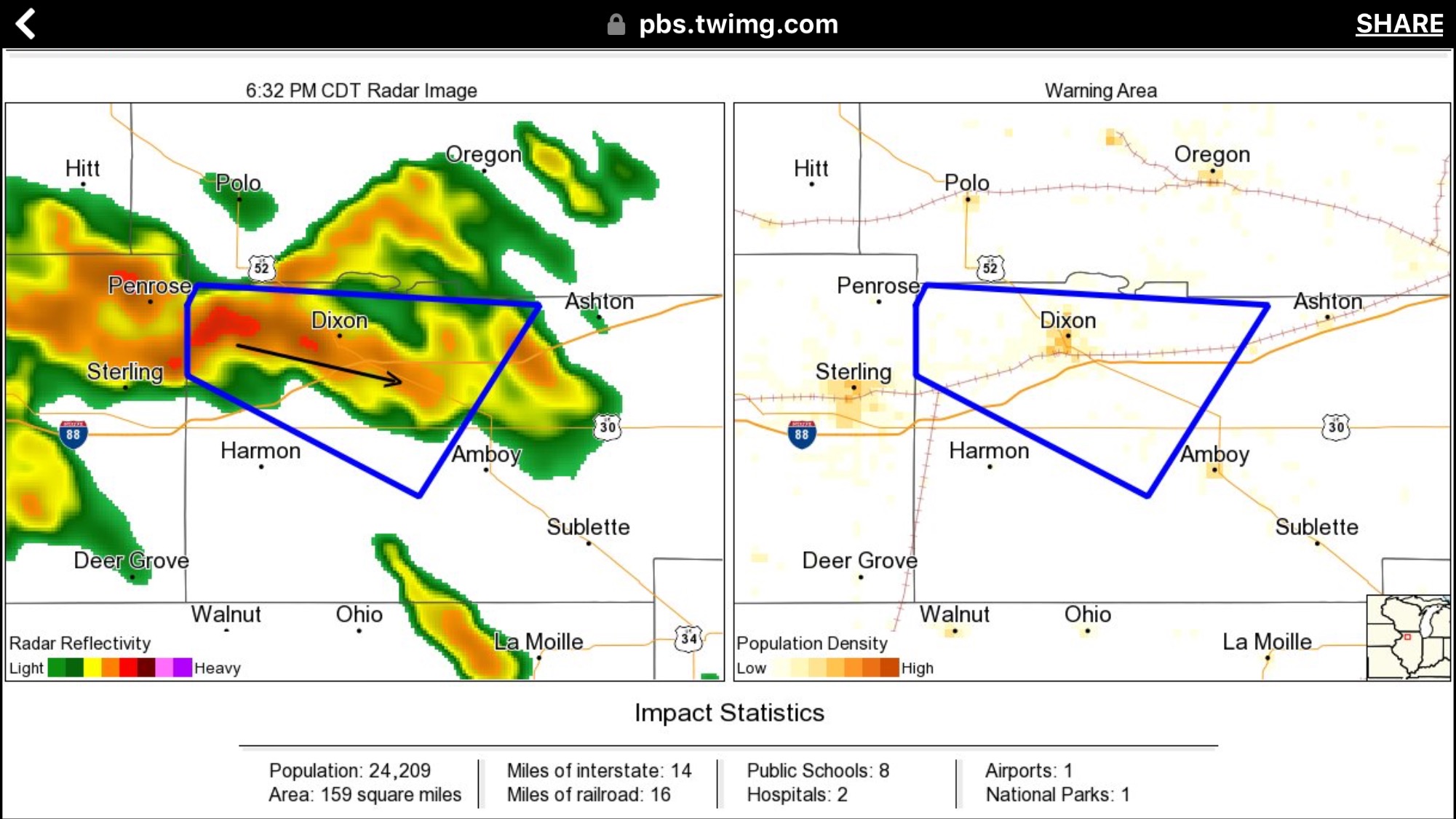 A few minutes later, that warning is issued. NWS policy states that once a storm is tornado-warned, it retains that warning until the storm falls apart. This is how the NWS errs on the side of caution.

The good news is that they are able to issue this with a high degree of confidence, as a number of spotters and chasers (the little red dots in the picture below) are already on the storm, As this radar scope pro composite reflectivity/base velocity product shows: 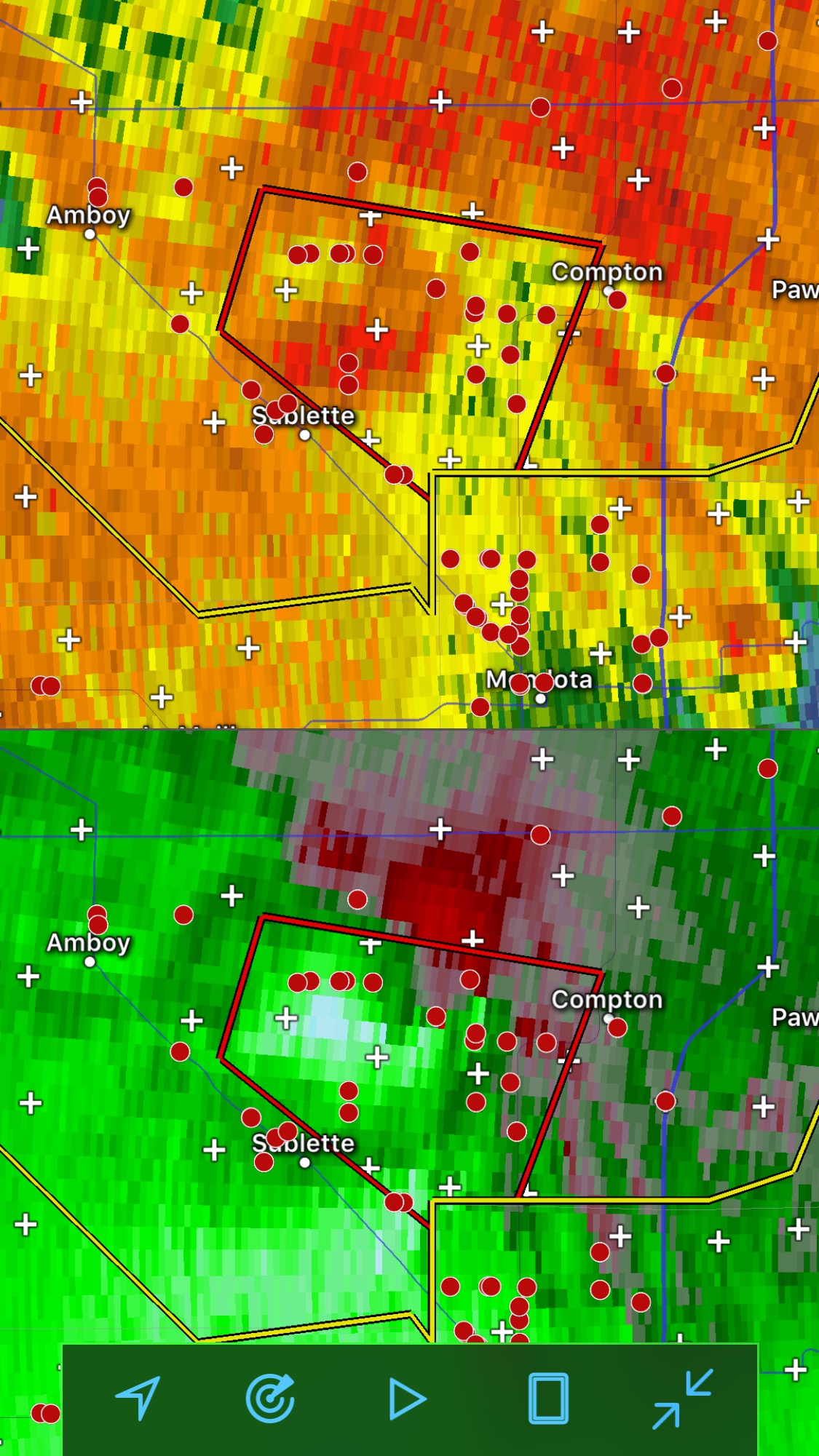 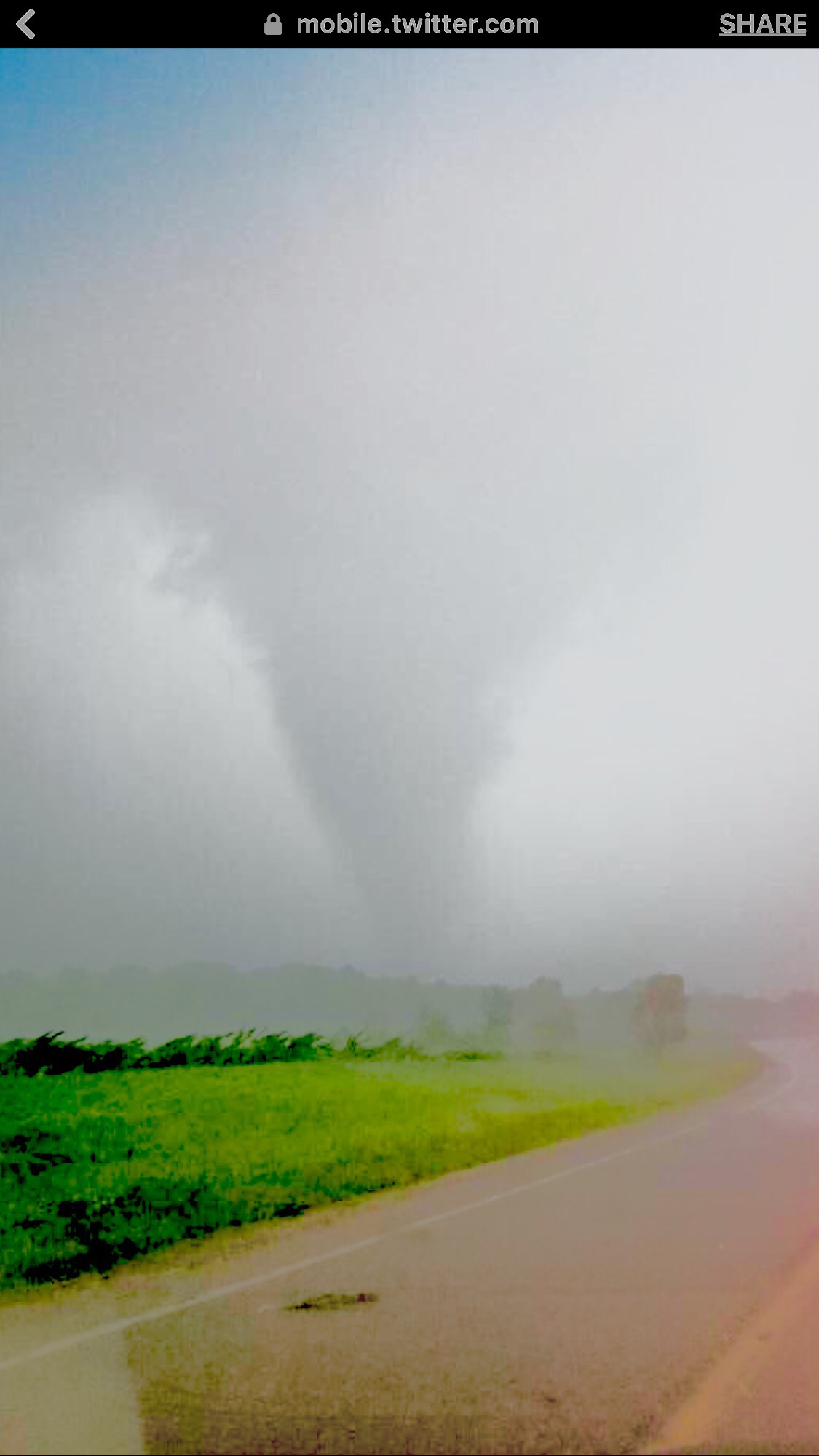 This tornado was the first one in a series strewn across northern Illinois. The storm reports (from later in the evening) show the path of the storm pretty clearly: 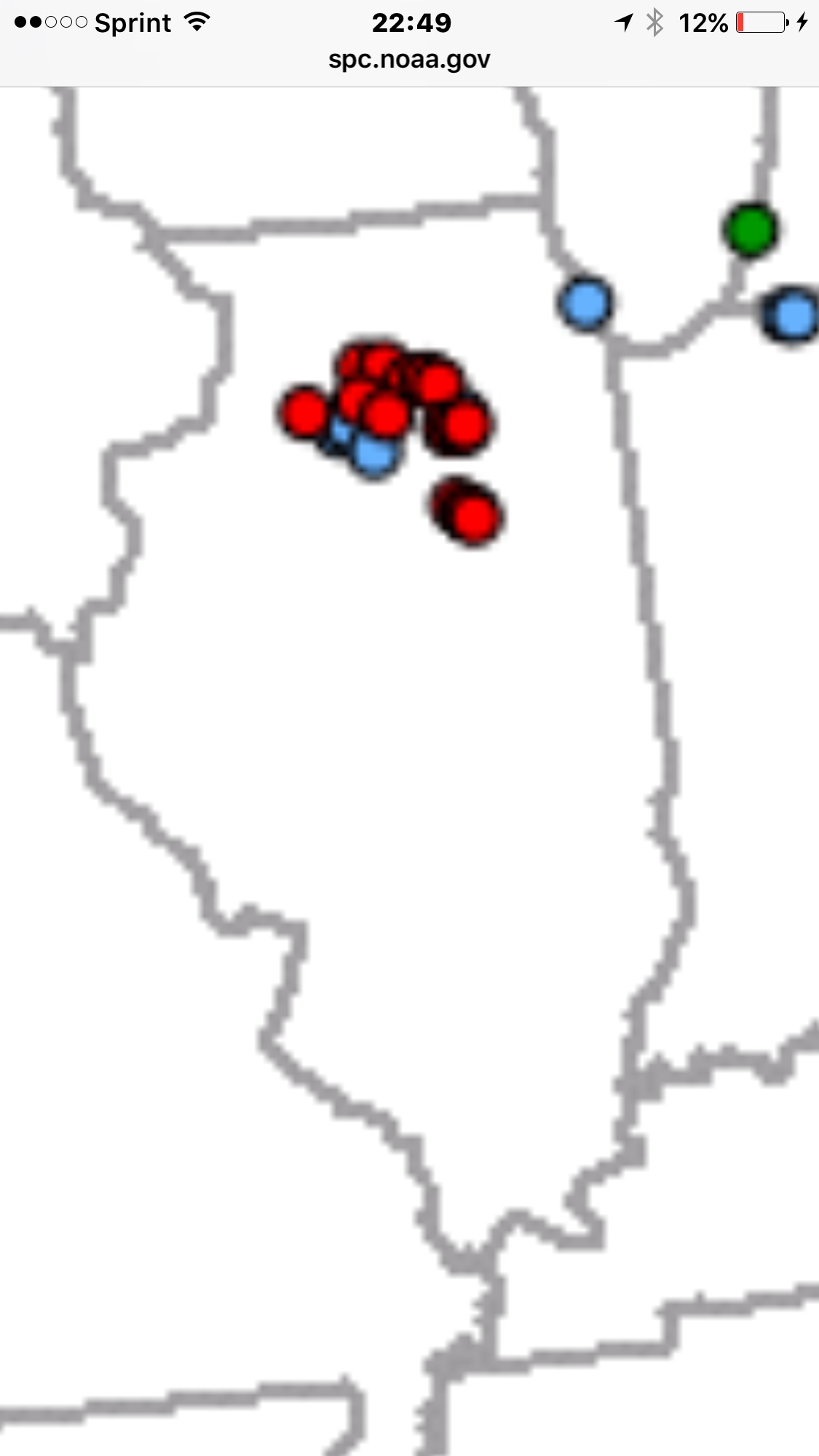 Chasers like Adam Lucio captured photos and video of other storms (at Marseilles, Illinois and further east). I will add links to those photos as I get a bit more time or the weekend.

(NWS has a preliminary page for this event up already.)

CASUALTIES OF TRAVEL: One pair of leather shoes (sole split) and a dead notebook (hopefully just an ‘old battery’ issue)