My name is Lisa Beal. I’ll be touring with Tempest for my 15th trip this year. Where has the time gone!

I’m nearing retirement, but still have plenty of energy for storm days. I’ll need it: I usually carry a hefty assortment of gadgets, earning the name Gadget Girl on tours past.

I live in the southwest suburbs of Chicago, in Bolingbrook, Illinois, and I work as an IT middleware engineer (that means I make big servers go, go, go). Like my buddy, Owen, I’m tied to a keyboard most of my waking hours — and sometimes those hours run really long. To maintain my sanity, I will NOT be answering calls from work on vacation. Would you?

My typical chase-cation starts with a drive to Oklahoma city, usually with a stopover near friends on the way. And I take about 3 days to get home afterwards, if severe weather is around for chasing. I have a dedicated chase vehicle (“Gadgetmobile II“, as the first one was gracefully retired in 2007), and like chase in groups, with a friend or two, or solo. “Gadgetmobile III” is coming soon, probably at the end of the model year (and, yes, I’m leaning toward SUV for the next one).

I’ll be arriving in Oklahoma City on the Saturday evening before the trip so if anyone is wanting to explore locally, let me know!Usually, I make a trip to WalMart on the Sunday before departure, and it is pretty usual to have 2-3 others with me for that store run. let me know if you need to do that.
Text me … to connect for that store run, a lunch or dinner on Sunday, etc. I welcome the company.

II cannot say enough good things about the Tempest crew, especially Bill Reid. He is the storm whisperer, and has put me in front of at least 30 of the tornadoes I’ve seen, among the 50 total I’ve seen. Bill is also an excellent photographer. Don’t be shy if you need camera advice. His his very solid advice.

I will be blogging each evening (or early the next morning) after each chase day. Look for updates at
http://www.underthethunder.org/blog/2018/05/
(once I set it up, in the next few days) . I’ll also be posting (after the fact) to Facebook &/or Twitter. I’m user polarpal99 on both.

Check here regularly for updates, starting around 10 May 2018.

Better I should do a current season post for May 2018.

Sorry for the OOPS!

I am a former polar explorer (3 years contracting for the U.S. Antarctic Program (USAP)), a career computer technologist, and — Surprise! — a storm chaser. I’ve been chasing in several forms now for 20 years: I go with tour groups, chase with a few local teams, and chase solo. I’ve seen about 3 dozen tornadoes and uncounted severe storms in that time. I still have plenty to learn, but I know enough to keep myself safe chasing and doing storm spotting for my local emergency management agency.

I’ve chased with Tempest Tours since 2002 (though I’ve missed a few seasons, due to job or economic constraints). If my count is correct, my 2016 trip will be my 14th chase with Tempest. I guess you become a regular after spending over 100 days with these folks. You may find other excellent tour companies, but none better! If I had all the money I could ask for, I’d still choose Martin Lisius and Bill Reid to guide me ‘under the thunder.’ (Yes, I use that expression a lot!) I would have to say that about 2/3 of the tornadoes I’ve seen in my life were with Tempest.

I tend to favor chasing in May, since we cover a broad range of the central and southern plains during a ten-day stint. I’ve found that this makes for better ‘blue sky’ days, as well as lots of target choices when the weather is active.

If you were to ask those who’ve chased with me before, they’d probably tell you I carry a lot of ‘toys’ and invariably am the unofficial IT helper for the tour. If your technology gets messed up, please feel free to ask me for help. I do not know every thing about every gadget or software package, but I give good guidance, tend to be generous with my time, and derive great satisfaction from helping others. (I also speak a little Spanish, should the need arise; I spent a lot of time translating for one guest a few years back.)

Also, those of you who know me will note that I’ve dropped about 80 pounds since last year. This is partially due to a (usually) strict low-carbohydrate diet, better commitment to exercise than I’ve had in years past, and the mysteries of modern medicine. You’ll see me eating a lot of salads, but trust me, I’m really enjoying myself.

One last thing: I sometimes talk too much. Feel free to stop me!

Thunder and lightning are at my door. Nothing severe here, but I feel like I’m being teased. Note: the two odd-shaped polygons in the center circle are the city limits for Naperville, Illinois (where I volunteer for the emergency management agency’s weather desk) and neighboring Bolingbrook, where I live. 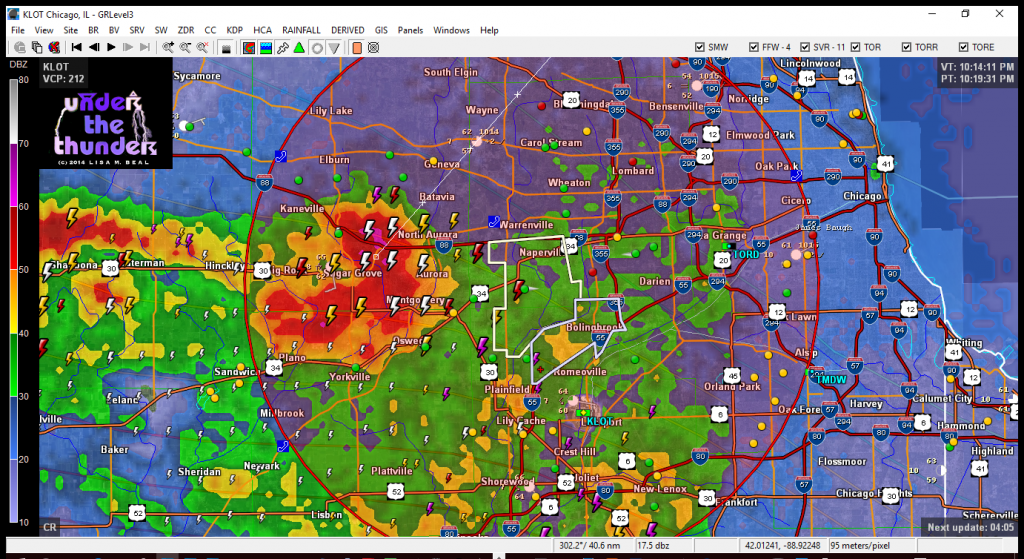 I’m going through my pre-vacation checklist. I just finished one deceptively small item: cleaning my Nikon camera lenses, a two-hour job, thanks to not doing it in a very long time. Beats having dirty lenses!!

Here’s what’ was left of a much longer list when I started my work day:

We’re in the process of migrating to GoDaddy from Yahoo.

This tour’s leadership includes veteran chaser and guide, William (Bill) Reid and drivers Bob Smith (a wildlife biologist) and Bill’s colleague, Rook, who used to work with him as a contractor meteorologist before the National Weather Service and FAA thrust the job of observations and Forecasting on air traffic controllers at small airports.

The rest of the team is a mix of returning chasers (like David Balfour and myself), first-timers from the UK and Australia, and a handful of sky-lovers from all across America (most of whom have had some kind of tornado encounter during their lives). About half of us are degreed scientists (meteorologists, biologists, chemists).  Several of us work in IT.  Many of us have desk jobs (and need a little excitement to break up the hum-drum routine).  There are 16 of us altogether, two full vans of people.

Our vehicles are comfortable 15-passenger vans with broad windows to offer a clear view of the sky from every seat.  Over the years, the technology has evolved, so each van has onboard WiFi connections to the broadband modems used to download weather maps and forecasts, view BIll’s many chase trip logs, and exchange email between our laptops (and smartphones) and the outside world.  Everybody has a little nook for camera gear and the snacks we carry (as real meals will be few and far between once the atmosphere recovers).

The weather briefing is a little bleak for the first half of the trip: Sunday’s tornado barrage in Nebraska has scrubbed the moisture out of the Great Plains, leaving us only a low potential to see severe weather far to our east (in the ‘jungles’ of Missouri).  A strong ridge — the chaser’s arch enemy! — will dominate the plains for 4-5 days thereafter.  We get a refresher on the ingredients for severe weather, so we will be reminded when the outlook for chaseable storms improves.

We also get our official T-shirts. This year, Tempest added a nice personal touch: a personal greeting tag attached to each team member’s shirt (pictured above).

The shirts (pictured at right) feature  tribute to engineering whiz and self-taught meteorologist Tim Samaras (left), his son and photographer Paul Samaras, and Tim’s longtime chaser partner Carl Young. Also depicted is one of the ‘turtle’ probes that this team would anchor in the path of oncoming tornadoes to measure temperature, wind, and barometric pressure.  One of thsee 40-pound probes, an original design by Tim Samaras, took the first readings from inside a tornado (as well as video inside the funnel from ground level).  The November 2013 National Geographic magazine talks about the life and death of Tim Samaras, who had received several recurring grants from ‘NatGeo’ for his groundbreaking weather research and amazing photos of his work.

1045 – We depart for southwest Missouri, where our best chance — but not a great chance— for some storms exists.

1223 – as we approach the outskirts of Tulsa, light rain starts

1238 – Heavy rain as we pass through the Tulsa metro area.

1510 – we make a 10-minute pit stop at flying J in Joplin, MO, where and EF-5 tornado plowed through on 22 May 2011. The regional hospital in Joplin was so badly damaged, that they had to tear down and build a new one. Many people lost their lives that day. I was out with the Tempest Tours team chasing that day, but was near Southwest City, MO, several counties to the south. Today, the storms are only delivering rain and LOTS of lightning. Apparently, delivering lightning is a local specialty.
1525 – dpt Joplin for points east.
1541 – We take the Sarcoxie exit south.
1544 – Travel east, out of Sarcoxie

1617 – Depart Monett, MO,  eastbound on highway on H.  The radar show several storms, but nothing is rotating:

1631 – We move south, past Verona, continuing eastbound on US 60E. Trying to get ahead of the outflow boundary into warm air, where we might see some lightning and hail together.  We are briefly pinged by pea-sized hail.

1700 – We enter Springfield, MO from the south. We have abandoned hope for today being a good severe weather day, at this point. It looked like we might see some good storms on the front of the outflow boundary, but they never materialized. We had a brief encounter with a storm that was dropping piece sized hail near Monett, but that is all. Mostly driving through a long car wash, getting wet, and everybody getting my impromptu mini-lecture on how all the various radar screens — reflectivity, base velocity, storm relative velocity, etc. work.

1745 – Check in at Days Inn (near huge, new Bass Pro store). WiFi here is DaysInnBassPro ( YES, really).
I wonder if I’ll be logging into FishNet. (LOL)  The storms slog slowly to the east, but weaken as they go. (Yawn!)

1900 – Meet for dinner.  We eat at a local sports bar and grill, Bair’s.  I opt for the buffalo chicken salad, a luxury meal compared to the convenience sore meals that lie ahead. We watch the Boston-Montreal hockey game (a warmup for Bill’s game, the L.A. Kings vs. the world). Bill jokes about the Cubs wasting all those runs, as the rain approaches. If the game is rain out before the 5th inning is done, it’s a ‘no-gamer’. (The Cubs go on to slaughter the Cardinals 17-5 in 9 complete inning. Nice try, Bill!) I remind Bill how much I’m looking forward to the Blackhawks-King series for the conference finals, should each of us cheer our respective NHL favorites on to victory.

EOD – We return to the motel. Here our route for the days ends.

We blow off a little steam with a lobby party. This particular Days Inn sells a little alcohol at the front desk.

OK, gang! the old MT blog has been fully converted to WordPress entries. Most of the 1997-2007 entries are marked private until I add the photos, clean some formatting, and otherwise make them more presentable.  Keep checking back!